Here is a selection of old photographs of the park at different times. If you have any others please send them in – we’d love to see them.

These wooden gates at the London Road entrance to the park were the original gates before the current gates were installed. These would have been removed sometime around 1935 to be replaced by the two lodges and the new gates. There’s something nicely rustic about these.

Another view of the wooden gates also showing the iron railing which enclosed the park. The trams are heading into the city centre.

The slightly wider angle of this one shows the wooden gates, iron railings, and a lodge at the park entrance. This must have been an original lodge which was subsequently demolished to make way for the new ones. In the left foreground is what appears to be a water fountain. None of those on the park today. There is something in the bottom left corner but it’s not clear what it is. Any ideas? 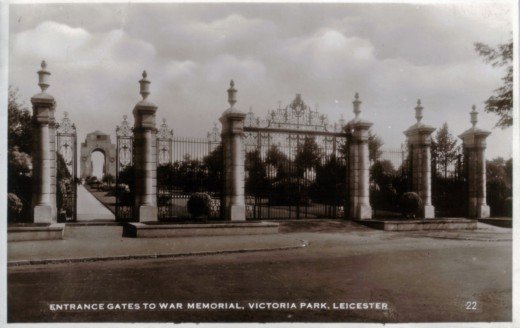 This is an early photo of the park gates to Memorial Walk, or Memorial Way, and what is now Peace Walk. The road was formally Occupation Road, but would have been Victoria Road at the time of this photograph. It is now University Road. Perhaps worried by the loss of a ‘Victoria’ the name was added at some point to Park Road, which then became Victoria Park Road.

This photo is an early photo of the park gates on London Road. An attractive tree lined avenue with a clear view of the Arch of Remembrance, although it doesn’t line up exactly. Over the years car parks appeared to the right of the gates, additional trees were planted, although with no clear planting plan, the trees grew more, as they do, and the avenue and view of the memorial became lost. Wouldn’t it be nice if it looked like this again? It’s surprising nobody has thought about it. (Oops – see Centenary Walk) 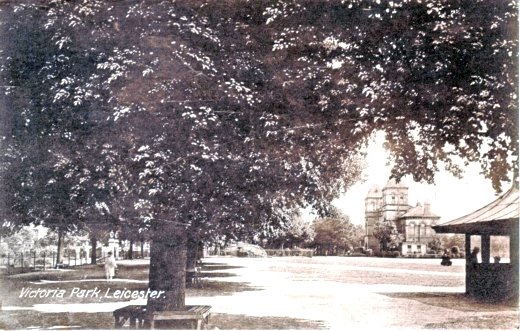 This is an early view of the park looking towards the old pavilion. To the right is an interesting park summerhouse which appears in many old photos but is sadly no longer on the park. To the left is Coach Drive with iron railings, but it is hard to see what lies beyond.The park trees have surrounding benches, as did many of the perimeter trees, but all these have also gone now.

Another view along Coach Drive although known then as Western Promenade. To the right in the background is the old pavilion whilst over to the left are the iron railings but nothing beyond. No sign of Demonfort Hall built in 1913 but a clear view to a large building which looks a bit too close to be on London Road. Anyone know what this is?

This final photo is of a watercolour by John Fullylove (1845-1908) called ‘A Summer’s Day on the Old Racecourse’. John Fullylove was Leicester born so he wasn’t far from home when he painted this. It is thought this depicts a scene around 1890. Looks like dogs enjoyed a run on the park even then.

This is a selection of old photographs of the park. Seeing the park in the past is essential to understanding the park of today. If you have any other old photos we’d like to see them and some can appear on this site. Better still, if the photos have a story to them we can tell the story as well. It’s the stories and memories which make the park come alive in the past.