The old, or lower, play area is situated opposite the new health centre on the eastern edge of the park. It has a very long history on the park and can be found on maps of the park dating back to 1904. In more recent times it has become isolated from the rest of the park, surrounded by large trees, in constant shade, and inaccessible from much of the park, It has also frequently attracted older teenagers from nearby colleges which has made it difficult for parents and young children to use it.

When money became available for restoration the Friend’s Group supported the creation of a new play area in a new location as the best way of overcoming the problems associated with the existing site. This was agreed by the Council, meaning the old play area would be closed, stripped of equipment and surrounding fencing, and returned to open parkland. 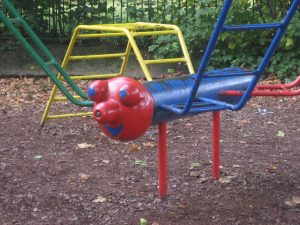 The Friend’s Group feel that this would be a loss of a valuable facility on the park and have reached agreement that the old play area will remain to give us time to explore new uses and the funding required to convert and maintain the old play area site.  We invited Friend’s Group members and others to suggest proposals for new uses along with plans for how it could be done. (Link Your Chance to Make a Difference on the Park)

Following this consultation the best use of the site was identified as a recreational and fitness facility for older teenagers and adults, retaining the existing fencing along with some of the existing equipment and with some new equipment in addition. We are currently exploring ways of financing this, including covering annual maintenance costs, and seeking partners and sponsors including nearby educational institutions. We will keep this page updated with details of the progress we make.

What Now for the Old Lower Play Area

This is your chance to make a difference on the park! The council is moving the lower play area on Victoria Park from its current position near the new health centre to the middle field between the two paths from Queen’s Road. When the new play area opens, with new ...
Read More