The old play area was in need of refurbishment. Much of the equipment was old, some reaching the end of its life, and the protective ground covering needed replenishing. Early in 2015 some funding became available. A planned paddling pool for Abbey Park was cancelled and the money shared between several other parks for new play equipment. Victoria Park was allocated about £60,000. The play area near the Pavilion had just been completely renewed so the priority was the lower play area for older children near the new health centre.

The first question which arose was whether to refurbish the existing play area, or close it and build a new one in a new location. There were pros and cons for each approach.

The old play area was seen as underused, it was in a remote and isolated part of the park making it inaccessible and not very popular. It was frequently used as a place for young people to hang out which deterred parents and children from using it, and there were frequent reports of anti-social behaviour. It was dark and over-shaded being completely surrounded by trees, with some large trees in the play area itself. The question was also asked, ‘If there was no play area there, is that the place we would choose to put one,’ to which the answer was negative. These were all reasons for considering a move.

However there was one significant advantage if it was kept in the same place and refurbished. The available money would provide more new equipment than if it was moved because there would be no groundwork or site preparation costs, which would use a proportion of the available funding.

To help arrive at a decision consultations were carried out by the Friends group. We had a stall at the Queen’s Road summer fair in June 2015 and people who visited the stall had the proposals explained to them and asked which they favoured. A majority preferred a move to a new site. Simultaneously a group of young volunteers working on a day of action with Focus charity  asked people on the park to complete questionnaires about the park, which included a question about the play area, and this time the majority favoured the existing site.

We also talked to people informally over this period, and there was no clear consensus from any group. Many people didn’t know there was a play area there, many who did didn’t use it, preferring Knighton Park with its superior facilities. Others did use it, liked the shady location and wanted it to be retained.

Following this the Friends group carefully considered the whole question. It was not our decision to make, it was a City Council project, but our views would count. We reported the different views but on balance felt there were advantages in moving the play area and starting again on a new site. There were two main reasons for this.

First, the existing problems with the old play area were well known, there had been complaints over many years, and refurbishing it would leave them unresolved. To invest more into a facility associated with problems and complaints did not seem very positive or productive. Second, we could not see any potential for adding additional facilities to bring more park users into that part of the park, and increase use of the play area. It was too remote and isolated and so would remain a play area with no other facilities nearby.

The advantages were that it should resolve the existing problems, be more visible, attractive and accessible, meaning it would be used more, and it offered much more scope for further development. In its new location there is the both space and reason for adding further facilities over time – whether that be additional play equipment or extra facilities for parents and others. The new location is closer and more visible from the Queen’s Road entrance, but not close enough for there to be a risk from traffic. Queen’s Road is probably the busiest entrance for park users. It is also more accessible than the old one from the pavilion side of the park. The field it is in, which we call the middle or community field, is one we are working to have reserved for local community use, and for facilities for local people. We are negotiating for this field to be kept free of formal sports provision such as the football pitch which is usually marked out there. 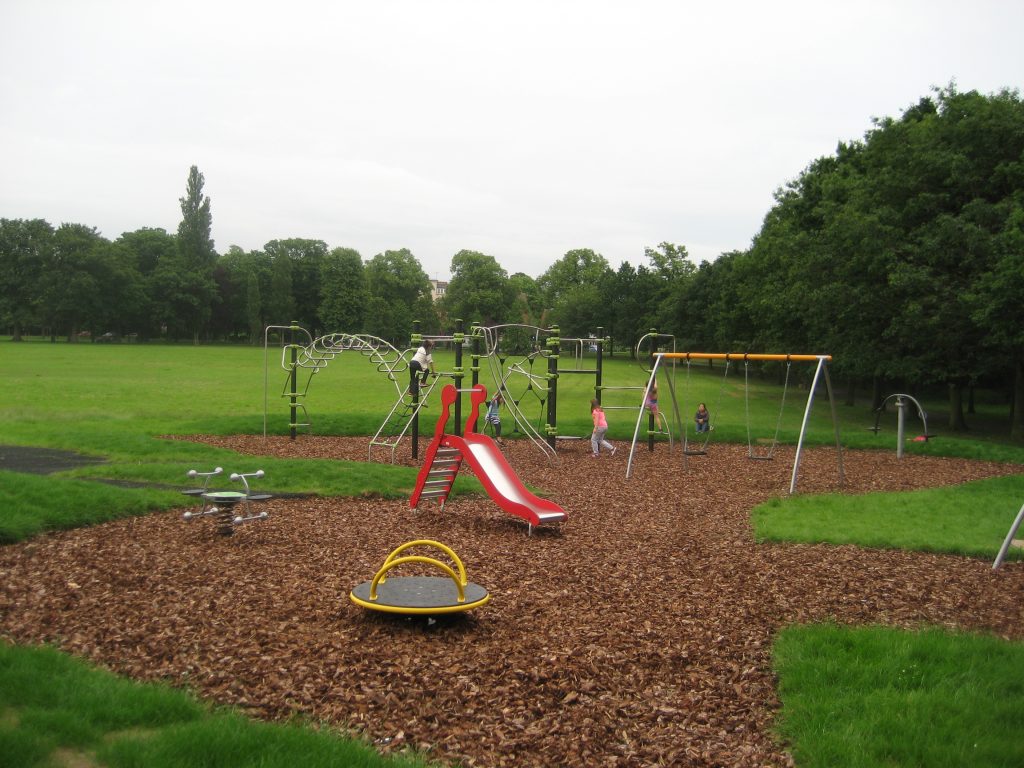 It is too early to know to what extent the new location will solve all the problems of the old play area, and also realise its potential for further development. Some problems have arisen, and some dissatisfactions have been expressed. The problem of young people on the play area has re-appeared. We are working to resolve that, but it will take time. There is not yet sufficient seating for adults, but some additional seating in on order. We have heard complaints about the lack of shade compared with the old area, and some feel the lack of railings creates more risk for children, and allows access for dogs and dog fouling. We have also heard that some would have preferred to retain the old play area location rather than have it moved.

Not everyone is happy, for different reasons. But we knew that would be the case from our earlier work. We also know it is impossible to do anything on the park which will be universally welcomed. The range of views about the park, and the diversity of park users and what they want from it, is so wide this will always be the case.  However, we do try hard to do what we feel is right for the park and for local people, And we try hard to get the views of local people so that the right decisions are made.

What do you think?

Why is the Play Area being Moved?