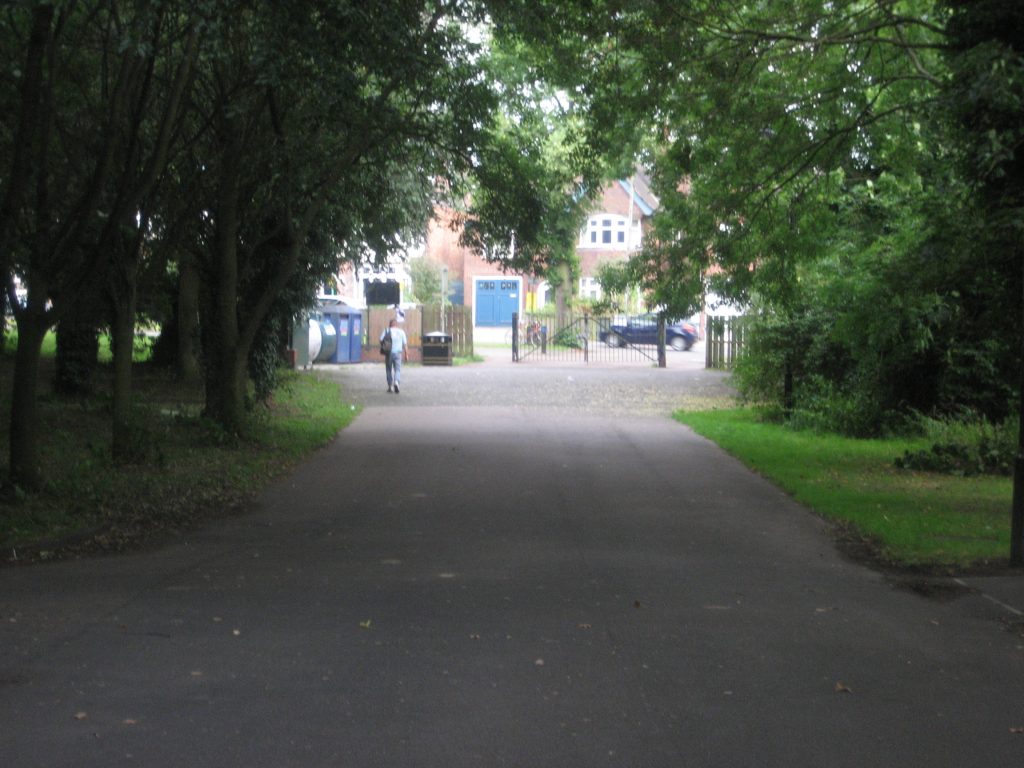 Everyone will be aware of the dreadful serious assault which occurrd on the park recently. It happened near to the Victoria Park Road entrance on the coach drive where the recycling bins are located. Following the assault various groups including local councillors, police officers, council officers and ourselves have met on-site to consider what actions needed to be taken to improve safety in that area.

Plans have now been drawn up by council officers which arise out of the suggestions made by the different parties involved. This post is to give you details of the proposed changes and an opportunity to comment on them. If you wish to comment please email the Chair (Doug Smith) using the contact form on this website. Your comments will be forwarded to the council officer responsible for the changes.

There are a number of different types of change being proposed for the area which are designed to improve safety for park users whilst retaining the essential balance of the park, and which improve the park at the same time, where this is posssible.

Relocation of the recycling bins

It is proposed to move the recycling bins to the other side of the entrance, the left side as you enter the park, backing on to the high boundary fence. This will allow the removal of the fence and wall within which the bins are located. The fence and wall  can be seen on the photo below.  These changes will open up this area making it visually more open with better sight lines, and also more attractive as a park entrance.  The agreement of Biffa will be needed to make this change.

Other changes to the park entrance

In order to further improve sight lines and create a more open entrance area it is proposed that the existing fencing and gates will be removed and replaced by retractable bollards and low bow top metal fencing. These will be similar to the recent changes seen at the Queen’s Road entrance when the new footpath was created.

The existing lights on the coach drive are the older pre-LED lights. Upgrading these to the newer LEDs would both add illumination to the coach drive generally, including some of the darker spots, and also reduce light spill-over into the park itself. LED lighting has a sharper cut-off meaning the light would be more concentrated on to the coach drive rather tha spreading a large pool of light further around. Street lighting in Leicester is now all LED.

It was also recognised that current tree growth was partially obscuring the lights and that some tree work would be required to clear and lift the tree growth in order to ensure that the lighting was effective. Apart from these changes, it was not felt it was necessary to add further lighting to the park.

This part of the park is not currently covered by CCTV cameras. There was no firm commitment at this stage to extend the CCTV coverage to this part of the coach drive but it will be investigated. This issue is not simply to do with installing cameras but also of ensuring that they are adequately monitored. Some existing CCTV on the park is linked to the university system and monitored by them and it may be possible to extend coverage on this basis. There is a view, though, that CCTV is not very effective at preventing crime or acting as a deterrent, and that its main contribution lies in identifying offenders. However, CCTV in combination with the other measures may all help to create an environment which feels safer for park users.

Maintaining safety and the park environment

At this point it becomes difficult to distinguish between changes in response to the assault, and the normal annual maintenance cycle for this part of the park, including the nature area. Much of this work is done in the autumn after the summer growth has finished. A report by the City Council ecology officer makes a number of observations about the area as a whole which includes some crown lifting  of trees and, subject to careful review, some thinning and removal of trees, including self-set trees. There is an additional need to control what is known as ruderal vegetation – the first wild plants, which include nettles and other plant types which often grow quite tall, to recolonise an area not fully occupied by other plants. These will be removed and a woodland seed mix will be sown which will help prevent further ruderal growth.

It seems very likely, though, that the normal annual maintenance, which involves clearance of higher ground level vegetation, the opening up of the spinneys to alllow natural light to penetrate, and tree work to lift and control growth, will be supplemented by some further work, possibly including additional tree work, which arises from specific safety concerns.

We have been assured that all work carried out will aim to maintain the balance of this part of the park and will be sensitive and sympathetic to the qualities of the nature area. However, in view of the public sensitivity to tree work we have asked that any major tree work which is additional to the normal maintenance routine be separately identified so we can make the details available for park users to comment before any work is carried out. Details will posted when we have them and comment can be made in the same way as for this post.

Please comment on these proposals using the contact form on this website addressed to the Chair. Your comments will go to the Council officer who drew up the plans. If you have other ideas about a response, let us know. If you support some of it, but have doubts or concerns about other parts, tell us which. Do you think this is sufficient as a response, or does more, or less, need to be done? Do these plans get the right balance between enhancing safety and preserving, and improving, the character of the park? It will help everyone involved in this if you let us know what you think. To send us a comment just click here and send a message to the Chair.

Safety on the Park – changes following the recent assault