When we first set up the Friends group in 2014 we wanted to know what people thought of the park, how they used it, and what they wanted to see on it. We visited schools to see what children and parents wanted, talked to people at local events, and asked people to complete questionnaires. We wrote a report on our findings which we called ‘Priorities for Victoria Park’, and this has guided our work since then. You can read the report, or a one page summary, here.

One of the conclusions we came to was that there is a conflict between the role of the park as a venue for large events and city-wide sporting provision, and its role as a local park to meet the needs of local people. We didn’t want to stop the large events, nor remove all sports provision, but we did feel some rebalancing was needed. When we looked at the park the best potential for beginning to do this was the middle field. 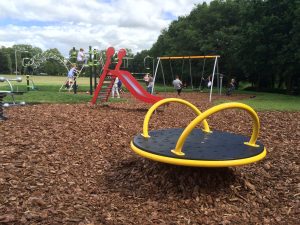 The middle field is the area bordered by the footpath and cycle route to the university on one side, and the footpath from Queen’s Road to the war memorial on the other. It usually has one football pitch marked out on it, although it is not well suited to sports pitches because the field undulates, and the low points can be boggy during the winter. However, for our purposes it is well placed for access from the Queen’s Road side of the park, but also sufficiently central for it to be accessible from the pavilion area as well.

We have asked that this field in future should be kept clear of formal sports provision leaving it available for developing as a focus for use by local people. The relocation of the play area is first step in that direction. Our immediate plans are to have additional seating and perhaps picnic benches added around the play area to give parents and other a place to sit, and to encourage more use of that field for recreational purposes. From what people have said to us it is already beginning to work that way, with groups sitting or picnicking over towards the play area site.

Over the longer term we will be looking at the things people said they wanted on the park to see what else might be brought on to the middle field for local people to use. One of the favourite ideas was a bandstand. That’s a big ask, but it’s in our minds and when time permits it is something we will look at in some detail. It would be great to have a bandstand on the park again. There was one near to the old pavilion but the pavilion was hit by a bomb in the last war and when it was demolished we think the bandstand was moved to Abbey Park. If you want to see what the old bandstand looked like in its heyday take a look at the pictures of the park in the past here. A new bandstand would be a great focal point for all sorts of things. It might even get ArtBeat on to the park!

Parents were concerned when a football pitch and goal posts appeared in the same field next to the new play area. We were also concerned as we had been working to get agreement for keeping that field clear of formal sports pitches so that we had an area that could ...
Read More